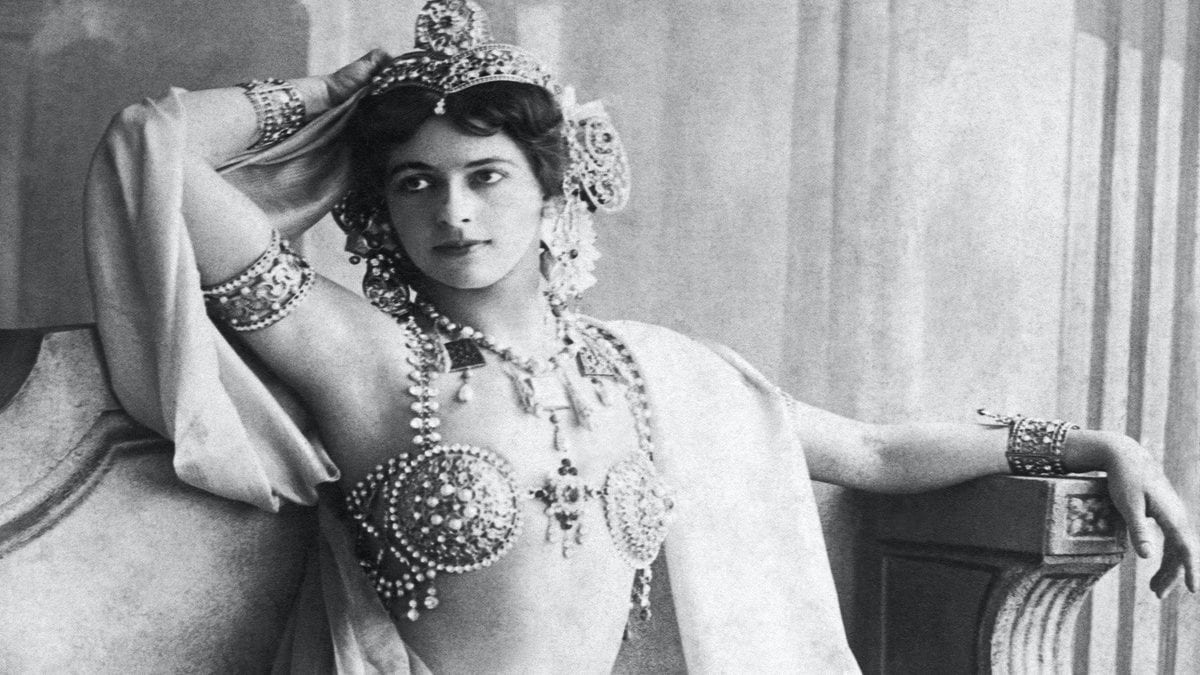 The dancer claimed she was Javanese and Hindu, and came to be known under the name Mata Hari, which means ‘eye of the day’ in the Malay language. And an eye she was – seeing and observing on behalf of the German Secret Service. Despite her swarthy complexion and her taste for oriental dance, Margaretha Zelle (to use her real name) was in fact Dutch by birth, but she would go on to invent a new identity, a fictional character, in order to help ensnare her targets. It was during a stay in the Dutch East Indies with her ex-husband, an officer in the marines, that she fell in love with the local culture. She was a gifted storyteller; people said she lied, that she cheated, that she betrayed. But all Mata Hari did was tell stories, without ever picking sides; she dodged and weaved, and she seduced. She had no political or ideological convictions, but she liked going in disguise, fooling those around her and pursuing a lavish lifestyle. She rejoiced in luxury hotels, travel and upper-crust receptions. She adored pomp and splendour, silver and gold, diamond necklaces, and vast sums of money above all; the crinkle of bank notes between her fingers. She also loved to shine, and to be watched, and to be desired. She was a flaming star of beauty incarnate. So it came to be that the German Consul called upon her services, just a few years before the outbreak of the Great War. Mata Hari needed to build her fortune, and the German Secret Service needed intelligence. The pact was signed, and their secret alliance was forged. Mata Hari became Agent H21.

Agent H21 used her wiles and breathtaking beauty to charm men at the highest ranks of power – mainly French industrialists, civil servants and politicians. For who could fail to succumb to the charms of such a lady? She was deft at her work, and took great pride in it. But one day, the German spy fell madly in love with a Russian officer. As soon as she laid eyes upon him, her heart began to flutter. His eyes were bluer than all the oceans of the world, and his warrior’s bearing entranced her. His voice gave her consolation, she who found herself so alone in all those hotel rooms. They lived out their love in secret. Mata Hari was happy. For the first time in her life she felt complete. There was no longer any need for lies, as reality fulfilled her. Now this morning they promised to love one another forever, underneath their sheets of silk. The officer’s blond hair glowed gold in the white light of the day. Mata Hari passed her hand over his cheek and looked longingly at him. She would never forget this face.

In the midst of a secret mission, Mata Hari learned that her Russian officer had been injured at the front. Her love was at death’s door; she might never see him again. He was in a field hospital in Vittel, just a few hours’ drive away. She had to see him; whether to save him or bid him adieu, she must visit. But to get to Vittel she would need papers. Without hesitation, she asked a French counter-espionage agent, Georges Ladoux, for his aid. This man knew Mata Hari’s talent well, and jumped at the chance to help, offering her the option of coming to work for France. Mata Hari was used to getting what she wanted by any means, and had no scruples about signing this new pact. Mata Hari thus became a double agent; Agent H21 in the service of the German confederation, but also plying her trade in the service of the French Republic. Regardless, Mata Hari made her way to her lover’s bedside in Vittel.

The life of a double agent was even more perilous than that of a regular spy; the German authorities saw right through her treachery, and deliberately issued coded messages making mention of Agent H21. As planned, the messages were intercepted by French counter-intelligence. The courtesan was sentenced to death for consorting with the enemy, and so one fine morning, facing the firing squad, Mata Hari spoke her final words: “Prostitute, yes, but traitor, never!”