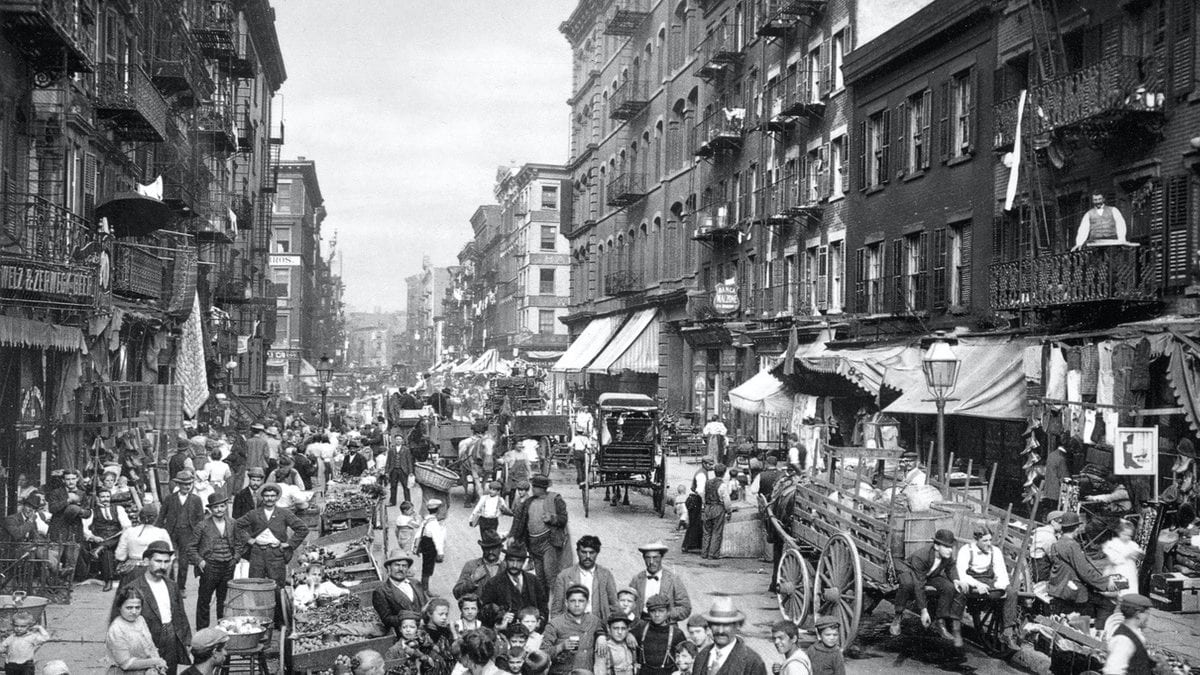 Here in New York, on the island of Manhattan, every man, woman and child knew Mulberry Street. In the midst of the day this long street bustled with Italians; it overflowed with Calabrians and Sicilians who had come off the boats at the end of the last century and stepped into the New World. In the old country these Italians had suffered at the hands of wealthy landowners, and had come to America in their hundreds of thousands. Indeed, their coming had been sought and encouraged – the new country needed to be built, and to be peopled. The Italians had taken to that dream of America the great, America the all-possible; America the free, the land where jobs and money were plentiful. Nor had those Calabrians and Sicilians given up their traditions and values, that mixture of faith and superstition, family, the Blessed Virgin, and Mediterranean cuisine: all these they had brought all the way from Italy here, to Mulberry Street.

Mulberry Street was very busy today. On either side of the road, the Italian mammas hollered to passers-by: “Potatoes! Ten cents a pound!” Here in America food was plentiful, but nothing came free to the Italians of New York. Everything had a price. Cross the bridge, pay the toll. Money could buy you power, and it helped build up the standing and the strength of the Italian community. Behind the stalls of fresh, juicy tomatoes, long yellow zucchini, bunches of rosemary and coriander and many types of wild mushrooms, the mammas called out their wares as their buyers bustled and grumbled. The mammas were watched over by silent men, neither stern nor violent. This was a duty; a tradition for the men to observe that the buying and selling went smoothly. On Mulberry Street, the Italians – Calabrians and Sicilians both – formed a single community. For every transaction, the market vendors would have to hand over a small sum, usually called the pizzo, to the man who represented them. He was their boss, who defended them from local authorities, who bought the buildings and the businesses, the one who ensured there was food to sell and order to sell it in. On Mulberry Street, Italians called this man their ‘godfather.’

The cries rang out thick and fast; the mammas were selling ladlefuls of soup for a few cents apiece. The pots of Calabrian and Sicilian minestrone were emptying fast; people bought a bowl, served themselves and ate straight away, as that was how things were done here in America. It hardly mattered if they used white beans like in Sicily or zucchini like in Calabria; the Italians of Mulberry Street were now a single community. And in the little restaurants of that street, the old folks met up and played at cards or dice as the children observed their games with curiosity. Of course, you needed money to play here on Mulberry – to play was to bet. There was money to be won, and the kids loved the atmosphere of competition. “When you’re a grown man you’ll understand!” one of the old folks shouted to a boy, before handing him a nickel and telling him to go and give it to his mother; it would make her day. Here in America, Italians shared what they had.

The west side of the street was not as busy; over there, carts drawn by horses were pulling barrels of fine Chianti to the taverns. The beasts whinnied at all the commotion, scraping their shoes over the stony street. The men lifted the barrels as children ran to and fro between them. Some played with spinning tops, others played at jacks. They were happy; they had been born here, in America, never knowing Italy under the reign of King Ferdinand. The children kept one eye on their mammas as they sold their wares on the other side of the street. An Italian mother was sacred and would always be, just like the Madonna.

So it had ever been, and so it would ever be.