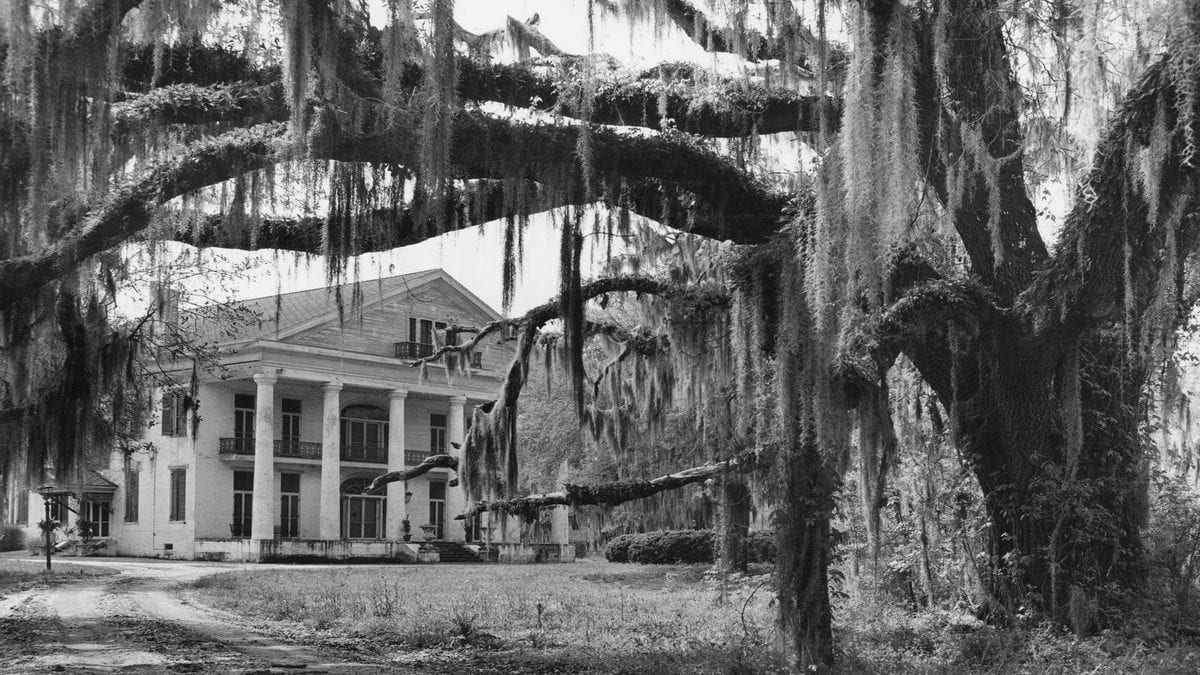 Nobody wanted this mansion, immense and unmistakeably colonial as it was. The cotton fields were gone, deserted long ago, and in the garden a great oak tree wept, its branches heavy with Spanish moss. It was quite possibly the most racist tree ever to have existed. It wept and prevailed like the white families who had lived in this mansion, putting hundreds of black men, women and children to work to keep them rich. Nothing remained of them now. The grounds were deserted, and the oak wept. All trees grow up toward the sky, but this oak refused. Perhaps today would bring a change: the Lane family had come to move in to the mansion, empty for a hundred years now.

Who were these Lanes? There were Mr and Mrs Lane, of course, their son Antony and their daughter Shirley. And their governess, Madame Colbert, a strait-laced French woman in her sixties. They had a few house staff, as one does. The Lanes were eager to get moved into the house. They knew the kinds of things that had happened here. Men had paid for their sins here; they’d been whipped, rebuked and humiliated along with their wives and children. But was that really any reason to keep the Lanes from living in this magnificent building?

The children had high hopes for the house — especially Shirley, who dreamed of having her own bedroom on the top floor, where she could see the moon and observe the stars before bed. Antony wanted to have the biggest room, apart from their parents’. A room fit to house his big, fancy toys. He had plenty of them, but the train set was the one he wanted to set up first. The set had little locomotives, just like the ones that connected the North to the South, just like the ones that transported slaves to New York. The weeping oak watched the Lanes walking along the alley with their many suitcases. Then came the boxes, trunks and bags. The oak had seen many families leave this house. Time had passed, and the punishments of the southern masters were long forgotten. Only the weeping branches remained, only the oak and its tears of moss. Shirley stopped to admire the tree: “It’s so romantic, mama! It’s like a tree from a novel.” Last winter, she’d read Wuthering Heights by Emily Brontë and adored the book. She imagined herself in England, surrounded by the vast green wilderness of the moors. She wanted to live in a house from a novel, of that she was certain. Antony was already thinking about building a fort under the tree. In the shade of its branches, he could play at being a pirate, or Robinson Crusoe or a medieval knight. Antony had a fertile imagination; his mind could make any spot into a world of fantasy.

Antony had finally finished unpacking his things, so he’d been allowed to go and play beneath the tree. He pressed his hand against the trunk, full of the freshness of life. He felt the sap running through it, where the blood of the tree had dripped for centuries. He saw names, hearts and messages carved into the tree. All were written by slaves, who came here to kiss and to brave the forbidden, waiting and hoping for the day of their freedom and wishing to mark the moment so that it might be preserved for all time. The tree was a marvel. The sun set on the horizon. Antony climbed up onto the lowest branch to observe the colonial house lit up at night. A window glowed yellow on the top floor; Shirley must be setting up her telescope. The stars had not changed; nothing had moved. But those who had observed them had changed. From slaves to the enfranchised, to free black men, to the masters, to the Lanes. Antony swung his feet back and forth. Things had happened under this tree, secrets only the weeping oak could now recall.

“Shirley, come down here!” he yelled to his older sister. He wanted her to share in his fascination. He knew that his sister would tell him stories from her books, the great passionate love stories she always found in them. Shirley joined him, running over in her white cotton dress. She held out a book: Rebecca, by Daphne du Maurier. Shirley liked English love stories. She told him the story of the woman who had to face the ghost of Rebecca, her husband’s late wife. She’d just arrived at Manderley, a great manor even more splendid than their colonial house, where the governess wouldn’t stop talking about Rebecca. “Do you think stories like that ever happened here?” Antony asked. Stories like that, and darker stories, stories that would turn you white if you ever heard them.